It’s 11:35 p.m. in the living room and there’s a fire burning. This is about my favorite time of day to be alive.

They let me fly home for Christmas on December 20th. The plan was to go home for Christmas, head to Florida for a few days, come back for another week, and then fly back where I came from – and that’s pretty much how it went down. I had a great three weeks.

I flew nonstop into Atlanta Tuesday night and was reunited with my family again. It seems like there’s been a lot of that lately. On the plane ride I watched ‘The BFG‘, which I would highly recommend to anyone who likes a good animated story. The next day the guys told me that we were going camping the following night. We ventured out to our favorite spot: the Cape of Pretty Good Hope. It’s usually an island, but because of the drought it was a peninsula. We had more meats than Arby’s: pork-chops, hotdogs, sausages, bacon, and fresh venison. 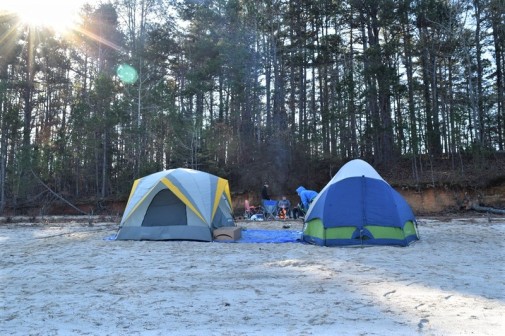 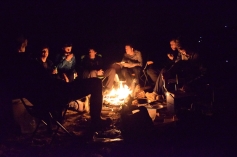 some of my favorite people in the world

On Christmas Eve Grandpa, Grandma, and Esther came over to eat low-country boil and dip stuff in chocolate with us. 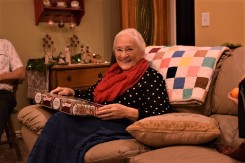 After church on Christmas day we went to Grandpa’s house and hung out. There was of course the annual, somewhat painstaking, family photos by the blue barn. We’re not really increasing, but the front row is getting taller. 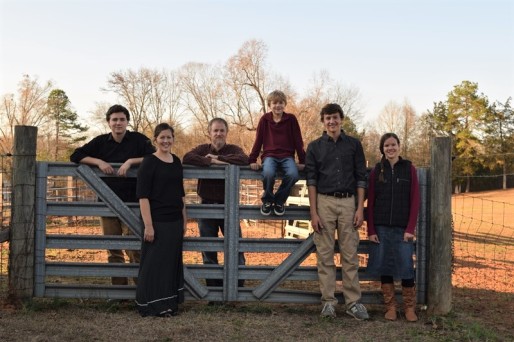 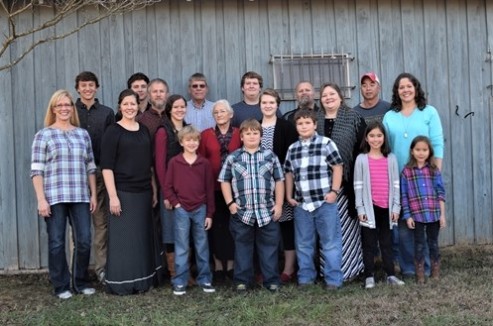 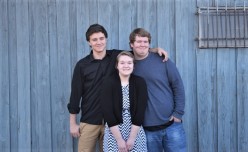 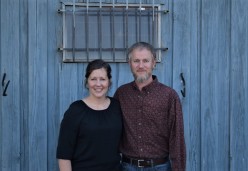 Luke, Emily, Aleisha, and I drove down to Florida in Aleisha’s car on Tuesday. They’ve got summer on demand down there. It’s a great place to chill for a few days, but I don’t think I’d want to live there. There’s throngs of people, most of whom know each other or are at least there for common events and reasons. I think it makes you feel kind of removed from reality for a few days – maybe like you’re in a Brian Adams song or something. It’s quite the atmosphere: Amish people rollin’ down the streets on rented segways and the rest of us trying to look as cool as they feel. Luke and I stayed with Mike in his grandparents’ house in Pinecraft. Some evenings Ashley, Aleisha, and Emily would come over to bring us food (or steal our food) and play Rook while we listened to our favorite tunes on the old boombox.

The volleyball tournament was on Saturday. I played with Sean and Ashton Overholt and some other people I had never met. It started at 7 a.m. and went until 3 a.m. the next morning.

One evening we went to Lido Beach to watch the sun set. It was gorgeous. After the sun had done its thing, we went to The Salty Dog where Rachelle instructed us to order the fish tacos – they were delicious.

Collin, Lauren, and I headed for home on Sunday morning. We stopped in Atlanta to pick Krista up at the airport; how we got her suitcase to fit in the trunk with all our stuff is still a bit of a mystery. Jumping up and coming crashing down on the lid with all my weight was definitely involved. Somewhere in Georgia we drove under a sign that said there had been fifteen hundred road fatalities this year. With it only being the first day of the year, the state is on pace to lose five percent of its population. It’s a dangerous world we live in. After I got back home I still had about ten days until flew back to Oregon. which was really nice.

the way many a creature has met its end 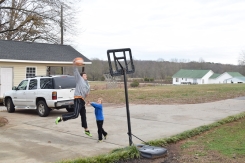 luke trying to explain the rules of ’21’

It was great to attend a couple school basketball games.

Mom got a record player for Christmas so we there was a lot of Peter, Paul, and Mary and John Denver floating around the living room. That’s a medium of music that should never be forgotten.

It did snow the one day.

I had to bid farewell to my room as next time I’m home we’ll be living elsewhere, at least that’s the plan. On Tuesday the 10th I flew back to Oregon. Right now we’re trying to get the rust spots off the sides of the bus..driving through salted roads is rough for a lot of reasons. We head back out on the road again about the middle of February.

On the plane ride back to Oregon I got to watch the movie Sing Street. If you like Ireland or have a brother or have ever wanted to write songs or be in a rock band, you should probably watch it – it really is excellent.

My friends at The Word Shakers have got a cool project going on where they’re practicing writing as an exercise, and I’d encourage you to check it out.

Javen Bear is 24 years old and lives with his beautiful wife Aleisha in Phoenix, Arizona. He recently entered a mental health counseling graduate program at Grand Canyon University where he also works as an admissions counselor. Javen’s super-power, if he had one, would be the ability to press pause on the world and catch up on reading. He enjoys fly-fishing, going to the theatre, and always uses Oxford commas. View more posts

2 thoughts on “Coast to Coast”