The Rock of Ages retirement village in McMinnville, Oregon hosts an event every year that features lots of live music, hot air balloons, food tents, face painting, bouncy houses, and my favorite, a huge water slide for anyone who wants to get wet. As it turned out that meant me and tons of kids from five to thirteen charging down a soapy black tarp at high speeds for a long time. It was pretty awesome. The Hummlys, which is a band comprised of three siblings, played about half way through the day. They were super good. 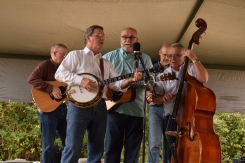 The lady on the left (Joanne?) made a comment about my t-shirt..which turned into a long conversation about all kinds of things, including their friendship with the young Mat Kearney. Joanne and Dianne.

One day I went fishing on the Calapooia River which runs right through my hometown of Brownsville. The fishing was good. The catching was not so good. Reminded me of the quote I’ve seen on my calendar for the last four years, “I’ve fished through fishless days that I remember happily without regret.” – Roderick Haig-Brown

About a week ago our youth group headed to the coast after lunch on Sunday. We chilled on the beach, ate supper, watched the sunset, and sang some songs. I also ran into a really nice guy named Greg who was carrying a much nice Nikon than mine. We talked for a while, and he shed some light on that very subject.

I’m kinda proud of this picture 🙂

In this photo there are four home states represented: South Carolina, Pennsylvania, Oregon, and Missouri. Shania is in town to visit family, and Travis will be joining the Gospel Echoes team and moving in with David and me later in September. There’s obviously a mighty northerly gale whipping at the moment.

Every year at the Gospel Echoes auction some kind people near Salem donate a meal to the highest bidder. Through a series of fortunate events, at least for me, I got to go along. The trip includes a ride to the coast in the tour bus, hanging out in some seaside towns, and of course, a meal with four of them. This year it also included a spontaneous stop to a mostly picked over estate sale. But I did snag an old AM radio for a dollar. The food was incredible, and was served to us by about ten people. 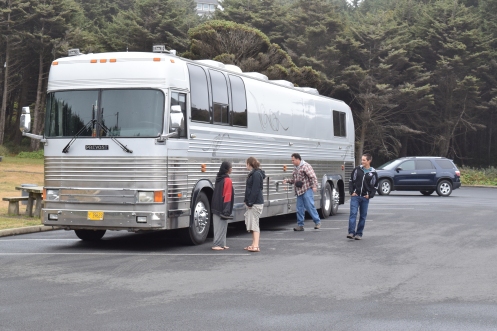 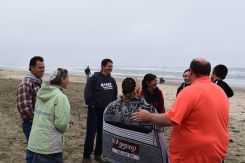 Last night some friends (including Brianna and Alisha Mullett who are in town for a few days)  and I went to the state fair. It featured a free (unless you got VIP) Jeremy Camp and MercyMe concert. They were both pretty good. MercyMe was my favorite. Afterwards we bought some tickets and road a mini roller-coaster. Quite thrilling. And then on the way out to the van this energetic worker of the ‘Rock and Roll’ ride beckoned us to hop on free of charge. A good Mennonite does not simply turn down such generosity. And wow. The thrill. The terror. The screaming. The rush of blood to the head.

Here’s a picture of the cool old barn in the Brownsville park.

This is the coolest thing I seen today. So I thought I’d paste it in here. If you have fifteen minutes to be encouraged, click the middle.

‘Be strong, all you people of the land,’ and work. ‘For I am with you,’ declares the Lord Almighty. ‘This is what I covenanted with you when you came out of Egypt. And my Spirit remains among you. Do not fear.’ – Haggai 2:4-5

Javen Bear is 25 years old and lives with his beautiful wife Aleisha in Phoenix, Arizona. He recently entered a mental health counseling graduate program at Grand Canyon University where he also works as an admissions representative. Javen’s super-power, if he had one, would be the ability to press pause on the world and catch up on reading. He enjoys talking walks with his wife, playing guitar, and always uses Oxford commas. View more posts